Kink and domination is a large world with a lot out there to consider. A common term that you might hear in the world of domination is a pay pig. It isn't uncommon for this to be confused with a sugar daddy. The two are quite different though. Let's take a look at the difference between the two.

What Is A Pay Pig? 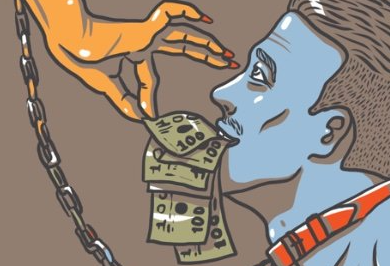 Financial domination is the act of allowing a dominant to control your money and ask for money from you in order to do tasks. These relationships can be virtual, happen in the physical world, or be mixed between the two. It all depends on what each party is looking to get out of the relationship.

Why Become a Pay Pig?

A common question for those who are interested in financial domination is why are they interested? The answer varies from person to person but in general, the submissives enjoy the lack of control or being exploited/humiliated. The dominants like the money but they also like the feeling of being in control and power.

As the name would imply, most pay pigs get humiliated and degraded as part of having their money controlled. That can include name calling, having to do tasks, getting nothing right away, or any number of things.

Is Financial Domination About Sex?

While financial domination has sexual activities involved sometimes, they are not required. A lot of professional financial dominatrixes maintain relationships with pay pigs without having any sexual interactions. That being said, the relationship is defined by those who engage in it.

Where to Find Financial Domination?

A lot of sites on the internet have arisen to support financial domination. You can find financial dominatrixes and pay pigs on sites such as webcam streaming sites, chatrooms, dating sites, kink communities, and more. The more reputable of a site that you pick, the more likely you are to be safe and enjoy yourself.

In general, financial dominatrixes that appear on webcam sites and escort listings are professionals while those who are in chat rooms or dating sites are doing it more for the fun.

Some Key Facts About Financial Domination

Pay pigs will also tend to pay less than a sugar daddy. A sugar daddy will maintain a longer relationship and pay for grand things such as trips, tuition, cars, jewelry, clothes, etc. Keep in mind that this is in most cases, not all.

When a pay pig pays money they aren't necessarily getting what they want back. They are paying for the privilege of interacting with their financial dominant in most cases. In sugar relationships the reward for paying is straightforward. Keep in mind that just because it may seem like a pay pig is getting nothing in return for their money, they are getting the experience and are often getting more than that. It just isn't always what they were expecting to be.

What Is A Sugar Daddy?

A sugar daddy is a guy who has a large amount of money who is looking to pay money for a mutually beneficial arrangement. In fact, it is often referred to as an arranged relationship because it is about the agreement, not about having feelings for each other. In fact, in a proper sugar daddy relationship, feelings shouldn't be a part of the relationship.

Sugar daddy relationships come in a wide variety of different styles. Some sugar daddies want a physical relationship for example, while others just want to have someone to spend their time with. No matter which way it is, the sugar baby is getting paid to provide a relationship not getting paid for sex or anything sexual.

Why Do People Want Sugar Relationships?

Sometimes it is simply the desire to have someone regular to talk to about things that matter to them.

Where to Find Sugar Relationships?

One of the most well-known sugar daddy sites is Seeking Arrangements. The company has now simplified the name to just seeking.

Some Key Facts About Sugar Relationships

Part of being in a sugar relationship is discussing the relationship before getting together and coming to an arrangement that all parties can agree on. This means that every relationship is literally custom tailored to the parties involved, no two are the same.

Sugar relationships tend to be harder to find than financial domination relationships. This is because of the higher cost to a sugar relationship. Many sugar daddies are very well off while a pay pig can come from any economic background. Using sugar dating sites helps to give you the best chances of finding a sugar daddy as many of them offer financial verification to ensure you are talking with someone who can be a real sugar daddy.

As you can see there is a difference between the two different styles of relationships. The one big similarity is the fact that both types of relationships can easily be found online. Both types are also equally rewarding relationships and if you are interested in either we highly recommend exploring them more.